Trending
You are at:Home»Technology»One Small Step For Man, One POWERleap for Mankind
By Bridget Ayers on August 4, 2008 · Technology 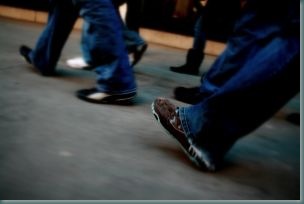 Some of the most brilliant ideas come from the simplest of places, an apple falling out of a tree, a child playing with a kite, the every day occurrence of a bird flying through the air.

Elizabeth Redmond and her newest invention POWERleap, falls into this category it stems from the act of people walking, and it’s just simply brilliant.

Elizabeth Redmond invented the POWERleap, a flooring system that generates electricity every time you move on one of the tiles. Constructed with glass and concrete, the energy generating tiles can bear a heavy load and are being designed to be placed in areas that experience high-foot traffic. It is Elizabeth’s intention to have cities powered by the people who live, work, and play there rather than outside energy sources

Elizabeth explains her invention on the Sundance Channel :

Now that it is out there this idea seems so obvious. It makes you wonder why we haven’t done anything like this until now, and what other absolutely obvious things we are missing?

At rest, your body is emitting 100 watts of power. That is more than enough energy to power the computer on which this is written. Given this, imagine how much energy we are emitting while walking to [or at]work, running at the gym, or dancing at the club! It doesn’t take a genius to appreciate the thought of that energy doing something more for us than dissipating into the ground or environment…

POWERleap is currently manifested in an installation of urban sidewalk tiles designed and engineered by Elizabeth Redmond. The system utilizes the phenomena of piezoelectricity: electricity from applied stress, founded by the Curie brothers in the 1880’s. A piezoelectric material when compressed distributes a charge across the surface of the material that can be harnessed and used to generate electricity.

WHERE WILL POWERleap BE USED?

POWERleap is still in it’s infancy stage and looking for backers, investors, and contributors to get it into the mainstream. Here are some other sources for more information:

Here is a link to her NPR radio interview

Here is a link to her Earth Keepers at Changents

(“Changents is an entertainment-driven online destination that enables “change agents” to tell their amazing stories while building a network of fans around the world who want to help them. Through videos, photos, blogs, mobile messaging and podcast dispatches from the field, change agents draw in “backers” to lend a hand – virtually or in person.)